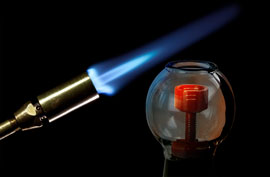 Since the practice of “Dabbing” has become so mainstream, people have been buying up Quartz bangers, Grade 2 Titanium Nails, and Butane Torches like crazy.

Many people have been wondering if they can use a cheaper Propane Torch, instead of a Butane Torch, when heating their Quartz banger, Titanium Nail or Titanium Pad.

The short answer is: NO, you should NEVER use a Propane Torch to heat up your Quartz Banger, Titanium Nail, or Titanium Pad for Dabbing.

Here’s just a few reasons why;

1)  Propane has NOT been refined to remove impurities. Butane IS refined, sometimes up to 10 times, to remove impurities that may be harmful. This refining process to clean the Butane is done primarily because they anticipate that people might be inhaling the Butane by way of smoking. This is just one of the many reasons why lighter manufacturers (like BIC) opt to make Butane lighters rather than Propane lighters.

2)  Propane gas contains “Ethyl Mercaptan”, a colorless gas with a distinctive putrid smell. Most brands of canned Butane do NOT contain Ethyl Mercaptan. Since propane is colorless and odorless, Ethyl Mercaptan is added to Propane to make it easier to detect a gas leak. Putting this smelly gas onto your Quartz banger or Titanium Nail is kinda GROSS and it’s likely to make your Oil, Shatter, or Wax taste FUNKY.

Most store-bought cans of Butane do contain both Butane and a small amount of Propane as a propellant. That’s only because Propane has a lower boiling point than Butane, and so it can be used to force the Butane out of the can.

For these reasons, we recommend that you use a BUTANE TORCH while Dabbing!